- the lazy cat avoids the water -

It is early June, and we are happy to announce that we bumped the version number of the package 'Luminescence' on CRAN another time (from v0.9.11 to v0.9.13; v0.9.12 was never released).
This release wasn’t in the books but was triggered by multiple errors on the CRAN check servers for an upcoming version for R. Means, for users working with R under development, 'Luminescence' would not build anymore.

As always, the new version ships a couple of improvements and bug fixes, for the complete list of changes, please consult CRAN website.

Here two cherries that may interest you:

'Luminescence' supports image processing (for instance, the output of the camera or spectrometer measurements) since 2013. However, the number of supported image formats was pretty limited to one (SPE-files). This release adds support for the Tag Image File (endings *.TIF/*.TIFF), which is more universally available. It also supports image stacks (a series of images available in one single file). The function name and functionality follows the ’Luminescence' canon and imports data to be transferred into an RLum.Data.Image-class object available for processing with standard functions.

Note: The import makes use of the CRAN package tiff and is only loaded on request because it requires particular libraries installed on the system that might not always be available.

We polished a few of the functions processing those image data along with the new image format support. For instance, image data can now easily be converted for and back to array, matrix, and list objects to allow easier processing with other R packages or functions. Most importantly, refactored the support plotting of those images. For example, here already using the new pipe operator available in R >= 4.1.0: 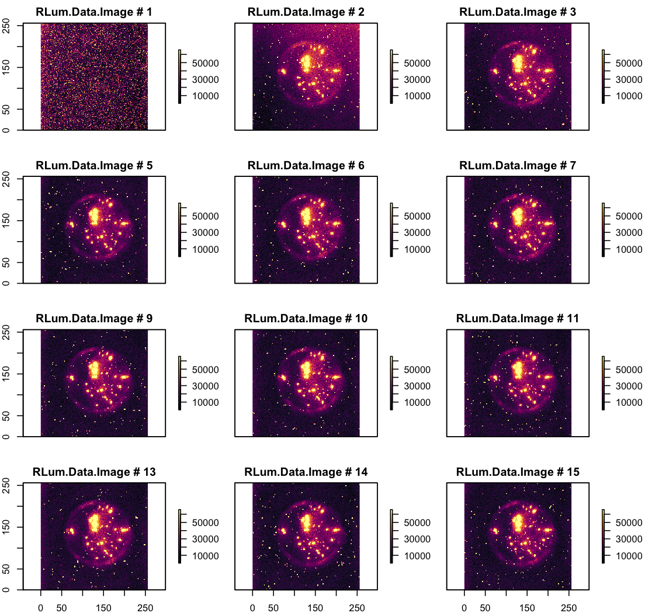 We hope you enjoy the new version of 'Luminescence' and in case you found a bug or want to discuss it with us, please visit our developer page.